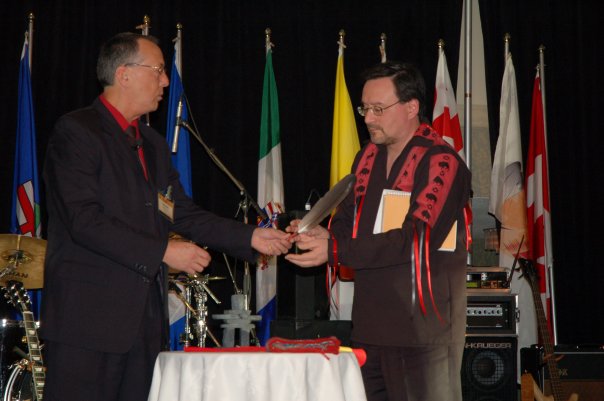 To provide some contrast and perspective to Indigenous “traditional knowledge” in comparison to Intellectual property (hereinafter referred to as “IP”) it is first important to provide some basic definitions of various IP aspects:  Patents, Copyrights and Trademarks

In the seminal textbook by Kintner & Lahr entitled An Intellectual Property Law Primer, Patents are defined as:

“In its simplest terms a patent is an agreement between an inventor and the public, represented by the federal government: in return for a full public disclosure of the invention the inventor is granted the right for a fixed period of time to exclude others from making, using, or selling the defined invention in the United States. It is a limited monopoly, designed not primarily to reward the inventor (this may or may not follow), but to encourage a public disclosure of inventions so that after the monopoly expires, the public is free to take unrestricted advantage of the invention.”

Generally, patents cover products or processes, giving the patent holder the right to exclude others from making, using, marketing, selling, or importing the invention for a set number of years from the date the patent application was filed with the Patent and Trademark Office.

Copyright is defined in Black’s Law Dictionary as:

“The right to copy; specifically, a property right in an original work of authorship (including literary, musical, dramatic, choreographic, pictorial, graphic, sculptural, and architectural works; motion pictures and other audiovisual works; and sound recordings) fixed in any tangible medium of expression, giving the holder the exclusive right to reproduce, adapt, distribute, perform, and display the work.”

Copyright does not protect ideas, but their expression, which must be original and fixed in a tangible medium.

Black’s defines a trademark as:

“A word, phrase, logo, or other graphic symbol used by a manufacturer or seller to distinguish its product or products from those of others. The main purpose of a trademark is to designate the source of goods or services.”

In effect, the trademark is the commercial substitute for one’s signature.

Indigenous ‟Traditional Knowledge” is roughly the understanding or skill possessed by Indigenous Peoples pertaining to their culture and folklore, their technologies, and their use of native plants for medicinal purposes. Most definitions of what qualifies as “Traditional Knowledge” are extremely broad. According to the World Intellectual Property Organization (WIPO), which has spearheaded the serious discussion at the international level, Traditional Knowledge includes:

Traditional Knowledge thus both includes and goes beyond the subject matter of intellectual property (IP) in the “modern” sense.  According to WIPO, what sets Traditional Knowledge apart from ordinary IP is the requirement that the knowledge be “tradition‑based,” referring to:

Knowledge systems, creations, innovations and cultural expressions which: have generally been transmitted from generation to generation; are generally regarded as pertaining to a particular people or its territory; and are constantly evolving in response to a changing environment.

“Collective indigenous rights” means the indigenous cultural and intellectual property rights relating to art, music, literature, biological, medical and ecological knowledge and other subject matter and manifestations that have no known author or owner and no date of origin and constitute the heritage of an entire indigenous people. (emphasis added)

As this definition demonstrates, there is an important distinction: Traditional Knowledge is not fixed in time (going back to “time immemorial” and going forward indefinitely) and is assigned to a collective entity. IP is fixed in a specific time period and is assigned to a specific owner (individual or corporate, and current). As Professor Graham Dutfield states:

Traditional knowledge, more fully and carefully defined, is understanding or skill, which is typically possessed by indigenous peoples and whose existence typically predates colonial contact (typically with the West), that relates to medical remedies, plant and animal products, technologies, and cultural expressions. The term “cultural expressions” includes religious rituals, sacred objects, rites of passage, songs, dances, myths, stories, and folklore generally. These forms of knowledge and cultural expressions are rarely frozen in time. Generally, they evolve over decades and centuries.

In many cases, Traditional Knowledge has been in existence since time immemorial. Even if an individual author or inventor is known, most proposals for Traditional Knowledge should be regarded as the property of the collective culture or tribe as a whole.  An example of this would be the Cowichan sweater: the original designers, weavers and artisans are long dead, but the Cowichan people, part of the Coast Salish peoples of southwestern British Columbia, claim a distinctive collective Traditional Knowledge/Intellectual Property right over the knitted product and art form.  No one person or family claims the design/technique or art; it has been held by the Cowichan people as an entity since time immemorial; it will be carried forward through all their generations to come; and it is expressed collectively.

Efforts to improve the protection of Traditional Knowledge have been informed largely by a recognition of the need to counter the negative effects on indigenous communities arising from the widespread commercial exploitation of Traditional Knowledge, especially in the pharmaceutical, agricultural, cosmetic, and entertainment industries, and in the retail market sectors (see Kintner and Lahr, An Intellectual Property Law Primer, pp. 61, 117, 119, 125 & 273).

Indigenous groups have been quite vocal in their complaints about the lack of adequate compensation, loss of community rights, misrepresentations of products and practices as indigenous, and the unauthorized public disclosure and use of secret knowledge, images, and other sensitive information pertaining to indigenous communities (see Darrell A. Posey and Graham Dutfield, Beyond Intellectual Property: Toward Traditional Resource Rights for Indigenous Peoples and Local Communities (1996), p.27).

Given the above, a strong case has been made for the recognition and protection of Traditional Knowledge in the NAFTA. The development of measures specifically adapted to the nature and characteristics of Indigenous knowledge within the framework of a binding Indigenous Chapter, in keeping with customary/traditional Indigenous law is designed, not to confer economic benefits on individual creators, but for common exploitation.

Using terms that would serve well as a starting point for inclusion of a subheading Traditional Knowledge into an Aboriginal chapter of NAFTA, Munzer submits, in his article, a “robust package of legal protection for traditional knowledge”:

(1) An indigenous people holds their various claim-rights and liberty-rights communally and has the power to override or nullify some actions by their members.

(2) An indigenous people has a claim-right to

(a) their traditional medicines and health practices, including a claim‑right to state protection of minerals, plants, and animals used in these medicines and practices;

(b) their folklore, folk art, crafts, techniques, and knowledge;

(c) the biodiversity of their region; and

(3) An indigenous people has the power to create rules binding on others for access to the items listed in paragraph “2”, including physical samples and audio, visual, written, or electronic records of these items.

(5) An indigenous people and its members have a claim-right to receive just compensation for granting, after giving informed consent, access to the items listed in paragraph “2”.

(6) If just compensation is not received, or if prior informed consent is not obtained, an indigenous people or its members have a claim-right to, and a power to seek, royalties, compensatory damages, and equitable relief, and the state has a power and a duty to fine or prosecute the offenders.

(7) With respect to copyrights and patents protected by the laws of host states or other states, an indigenous people and their members have powers to

(a) exempt their folkloric works from the usual copyright requirement of being fixed in a tangible medium of expression;

(b) prevent others from copyrighting or using their folkloric works; and

(8) An indigenous people has an immunity against expropriation of the items listed in paragraph “2” by the host state.

(9) The foregoing claim-rights, liberty-rights, powers, and immunities are of indefinite duration, unless an indigenous people exercises a liberty-right and power to limit their duration with due appreciation of the consequences.

Supporters of Traditional Knowledge rights find the existing IP system, which favors discrete innovation and creation over more gradual and incremental processes, unfair to Indigenous peoples. The argument for the protection of Traditional Knowledge often starts with the fact that the Traditional Knowledge has tremendous cultural significance, but it is also of value to people outside the culture, for their own uses. For example, many non-Indigenous have benefitted from Indigenous healing methods, and yet in most situations a tribe has no legal recourse against entities who use and benefit from its tribal knowledge. The most obvious basis for protection, the intellectual property laws will, unless radically overhauled, ordinarily prove unavailable.

Paul Kuruk, Protecting Folklore Under Modern Intellectual Property Regimes: A Reappraisal of the Tensions Between Individual and Communal Rights in Africa and the United States, 48 Am. U. L. Rev. 769, (1999)